This is an annually run competitiom and is open for teams of students to take part in. There is a £1,000 prize for the winning team and Henry Beaufort is currently joint 1st!

All Henry Beaufort Teams are currently joint 1st in the country.  The competition is made up of schools, colleges and 6th forms. 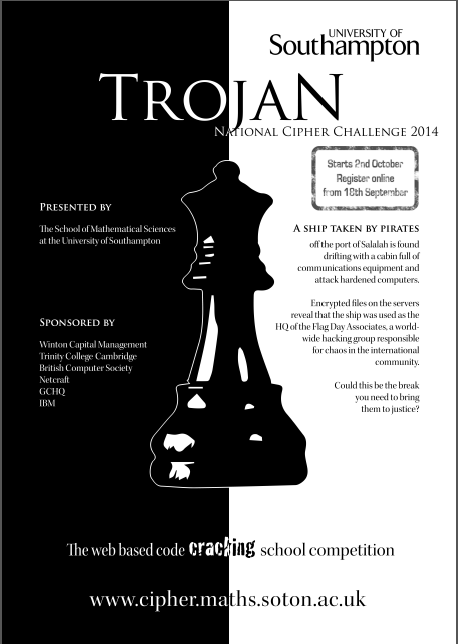 The National Cipher Challenge is a national competition run by the University of Southampton and partnered with GCHQ (Government Communications Headquarters).  The competition is run annually and is open for teams of students to take part in; there is a £1000 prize for the winning team. As a school we have three teams in the competition, “The Cipher No-Lifers” made up of; Sam Finch, Lawrence Sofflet, Dylan Harley and Aaron Freemantle. “Half Life 3 Confirmed” made up of; Peter Gregory, Oliver Ferris, James Lakin, Connor Clarke, George Hine and Cade Winter-Hotchkiss. Michael Ellis also has made his own team.

So far in the competition there have been four challenges, in each challenge there are two parts, Part A and Part B.

Challenge 1 was a Caesar cipher, which is where the alphabet is shifted by a certain amount to make a new “CipherText” which is then unreadable to anyone else.

Challenge 2 was another type of cipher.

Challenge 3 was a substitution cipher is where letters are switched to make a new cipher text, this is harder to crack than any Caesar cipher, however we found this is quite easy to crack.

Challenge 4 was released last night and was a rail fence cipher which was cracked by reading diagonally on a set number of rails.

We will keep you updated on our progress.