On Friday 17th October the U14 Girls Football team played against Fareham Academy in the second round of the Hampshire County Cup.

It was a great team performance and the girls played brilliantly and finished 9-0 winners. 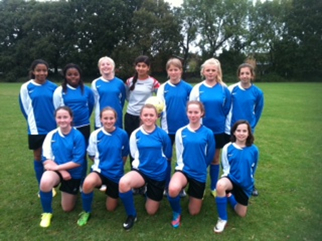 The quarter final of the competition was played against  Sand Down Academy; a school from the Isle Of Wight. The girls played amazingly, they dominated possession and looked in control of the game; but the Sand Down girls scored a goal on the break and where 1-0 up at half time. Anya Athwal made some amazing saves to keep the score at 1-0; and despite a number of chances we were unable to score. The final score ended 1-0 to Sand Down. It was an excellent run in the Country Cup and the girls will be looking forward to progress even further next year.