The school raised a fantastic £1331.94 for The British Red Cross through a fundraising day organised by Year 11 students in March.

The school raised a fantastic £1331.94 for The British Red Cross through a fundraising day organised by Year 11 students in March. 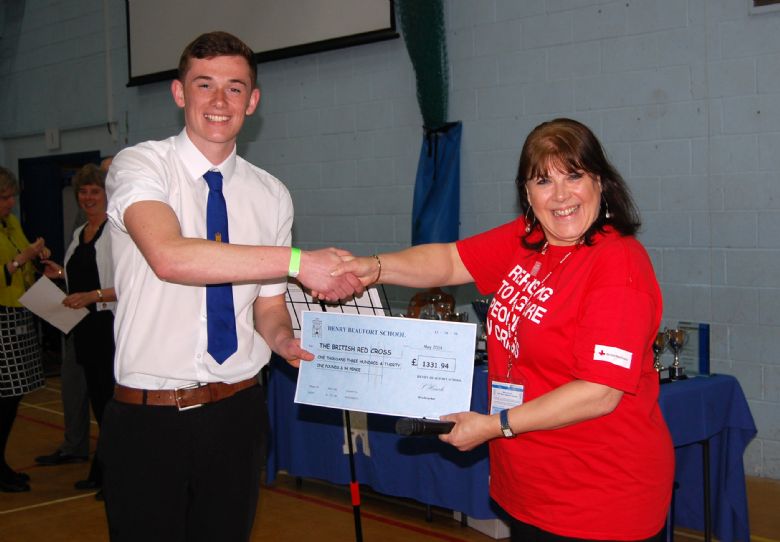 Our goal for the fundraiser was to raise awareness for the British Red Cross, but more importantly raise loads of money for them, and we did! The day was a great success and all went according to plan. We had Connor Wright, Richard Hutber, Josh Alp, Ben Vokes, Robbie Pullan, Victor Applebaum, Tilly Gowans, Ella Butterworth and Andrew Haysom, ferrying around hundreds of posters and flyers to promote the day!

During break and lunchtime we had Charlotte Doe, Emma Gormley- Adams, Nicole Blaxland, Lauren Richardson, Charlotte Hammond, Laura Whitlock, Beth Williams, Libby Adams, Lara Gaiger-Roscoe, Sian Goff, Frankie Barton-Cooper and Helena-Rose Brindle, selling as many cakes as humanly possible, to a great success. At lunchtime we had Dom Sikora, Jackson Smart, Greg Pagett, the P.E. staff and myself, running a penalty shootout and Crossbar Challenge, which was extremely popular with all the lads!

Alongside these events, we had contacted the Red Cross and they agreed to bring in a Landrover and also a fire recovery vehicle, which helped raise awareness of what the Red Cross do, educating students about the facilities they provide for family’s affected by fires. Next to the ambulance we had Mrs Fursman and Mrs Taggart running a wheelchair relay race which was great fun.

The day was a huge success and I would like to say a massive thank you to all the people who helped and donated to make this day possible and so successful.